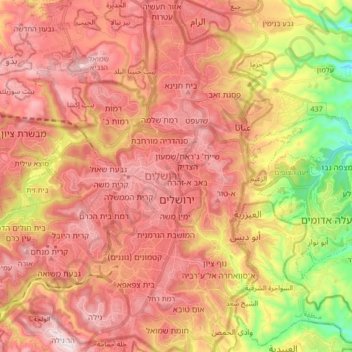 Jerusalem is situated on the southern spur of a plateau in the Judaean Mountains, which include the Mount of Olives (East) and Mount Scopus (North East). The elevation of the Old City is approximately 760 m (2,490 ft). The whole of Jerusalem is surrounded by valleys and dry riverbeds (wadis). The Kidron, Hinnom, and Tyropoeon Valleys intersect in an area just south of the Old City of Jerusalem. The Kidron Valley runs to the east of the Old City and separates the Mount of Olives from the city proper. Along the southern side of old Jerusalem is the Valley of Hinnom, a steep ravine associated in biblical eschatology with the concept of Gehenna or Hell. The Tyropoeon Valley commenced in the northwest near the Damascus Gate, ran south-southeasterly through the center of the Old City down to the Pool of Siloam, and divided the lower part into two hills, the Temple Mount to the east, and the rest of the city to the west (the lower and the upper cities described by Josephus). Today, this valley is hidden by debris that has accumulated over the centuries. In biblical times, Jerusalem was surrounded by forests of almond, olive and pine trees. Over centuries of warfare and neglect, these forests were destroyed. Farmers in the Jerusalem region thus built stone terraces along the slopes to hold back the soil, a feature still very much in evidence in the Jerusalem landscape.