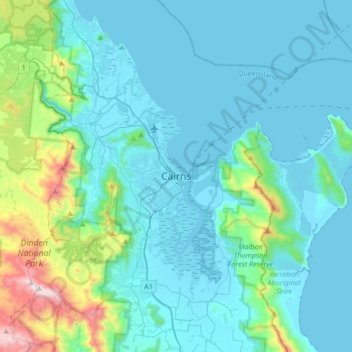 South of Smithfield and inland from the Northern Beaches along the edge of the Barron River flood plain are the suburbs of Caravonica, Kamerunga, Freshwater, and Stratford. This area is sometimes referred to as Freshwater Valley, though it is actually the lower part of Redlynch Valley; further up the valley are the suburbs of Redlynch, on the western side of Redlynch Valley, and Brinsmead on the eastern side. Stratford, Freshwater, and Brinsmead are separated from Cairns city by Mount Whitfield (elevation 365 m (1,198 ft)) and Whitfield Range. Crystal Cascades and Copperlode Falls Dam are also behind this range. (Kuranda, a town on the Barron River on the western side of the Macalister Range, forms part of the Cairns economic catchment but is in the Tablelands local government area and is not part of the Cairns urban area.)